A man had been married 40+ years. He is 75 + years of age. His wife cooked and cleaned and he provided income. They had sex once in a while. They took  each other for granted. Kids have moved away. He was content, she was sort of happy and then she died and now, OMG! he’s on his own.   As mundane as his marriage was,  he sure misses sex. After he settles into his new life, and is going crazy with loneliness, he joins a dating site.

He writes ( or has someone do it for him) a sizzling profile he hopes will attract a younger, sexy woman, unlike the conventional wife he recently lost.  He finds  some photos of himself when he was young and vital. What a handsome guy he was! He posts those undated photos, plus others of his cute dogs, the huge fish he caught, his RV, and restored Mustang convertible. The more recent, unsmiling, lifeless photos he posted show he has aged considerably, but he sure has an inviting profile. What a potentially sexy guy.

Yes, he’s sexy — but only in his mind. Reality is a different story.  It’s been a long time, or possibly he possibly never knew how to interact with a woman — how to flirt or how to be attractive to a woman. No flowers, no special gifts.  Social graces? Romance? What are those? He didn’t need them while married. His wife opened her own doors and he thought only young kids want or need romance.

The ravages of time have caught up with him. Health issues aside, he’s no longer physically attractive.  He doesn’t think (or can’t afford) to get his teeth fixed or his bacteria-laden bleeding gums cleared up, and no one has told him to trim his errant eyebrows that are growing all over the place, or to shave off his facial hair that ages him by at least 10 years. But that doesn’t matter, he thinks.  He’s still holding out for the younger, beautiful woman.

After many years of constant agitation by the “women’s movement” his brain has become addled.  He no longer knows what it means or how to be a contemporary “today” man.  Online he meets a potentially sexy lady and they start an exchange of emails. He calls the woman he has yet to meet  “dear” or “sweetheart”. Doesn’t he know how condescending that is? No, he doesn’t know and when told it is unacceptable, he apologetically retreats with “Sorry, I didn’t know”.

Damn! Why is this so hard?

It’s so hard for one main reason. He accepted the “script” for retirees developed over the years and he settled into the traditional decline oriented retirement lifestyle at age 65. Everybody does it, so he did it too.

He did all the “right” things retirees are supposed to do and here he is, alone and lonely and doesn’t understand why he can’t find an attractive younger woman to replace his wife. He is totally unaware what has happened to him and how unattractive he is to a younger woman.

He says he loves to travel but decline has left him unable to drive or he doesn’t want to  drive any considerable distance. He can’t think reasonably quickly. He’s no longer AWARE.  He is “old” but his “oldness” has nothing to do with his chronological age. He just followed  the established “retirees script” for retirement life, without realizing that following the script would lead to a comfortable life but rapid decline. The old saying,” use it or lose it” should redefine the word “retirement”. Ernest Hemingway called retirement the most depressing word in the English language and he was right.

Instead of accepting the “predetermined aging script” at age 65 that says it’s time to slow down, sit down,  and enjoy what’s left of life, he should have thought for HIMSELF and decided he was really going to make the most of his remaining  years and probably live a longer, healthier, useful, and even an exciting lifestyle that would appeal to a younger, sexy woman.  But it’s too late for action after the horses are let out of the barn. They are gone.

The message: Keep what you have as long as possible, but it takes effort. Unfortunately the human mind and body prefer leisure over effort and it takes ongoing effort that most of us don’t want to do or know how to do. After all, the purpose of “retirement” is to “retire”.

Youth is free but it’s a short term loan.  If we don’t make the effort to retain basic youthful qualities, the result is premature mental and physical decline. Barring unforeseen mental or physical illnesses, for the most part, avoidance of  getting “old” mentally and physically is as simple as trashing the predetermined “old age script” and making the effort to stay vital. Advanced chronological age itself does not automatically result in decline. 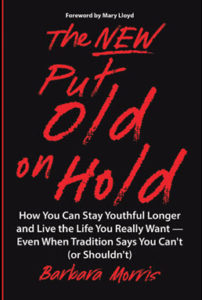