This is about Edward (not his real name), who needs a few pointers to win friends and influence people. I’ve given him one of my favorite books, The Power of Charm by Brian Tracy, (ignore the strike through) which is not only useful but often humorous. If he has read it, little has sunk in. Maybe I should also give him Dale Carnegie’s book, “How To Win Friends and Influence People.” Hope springs eternal according to Alexander Pope’s  Essay on Man

Socially, Edward is a tad clueless, but he’s trying, and he’s improving. Bless his heart, he is in his twenties and realizes he doesn’t yet know it all. He has not yet developed the maturity those his age had years ago. He’s a budding real estate mogul, euphoric about the current red hot real estate market, and he’s good at it. Very good. But alas, he hasn’t learned the necessary niceties that make him a polished gentleman. (Do they exist anymore?)

If you think I’m “complaining,” I’m not. Instead,  I’m “explaining,” trying to be helpful.

Without further ado, I’ll explain why, in my opinion, Edward is sometimes clueless and why it matters, especially when with older people, whose homes he hopes to sell.  I’ll give two examples.

First example: Edward has a girlfriend, Mary Beth, and she’s a lovely and loving “older woman” by a few years,  which  is good because Mary Beth has a maturity that is helpful to Edward whether he knows it or not.

To give a specific example of what I am “explaining and not complaining” about, for my birthday, Mary Beth gave me two beautiful teacups, along with exotic aromatic tea bags. Frankly, I thought the cups were too pretty to use, but without saying, “May I?” –, Edward took one of the tea bags and brewed himself a cup of tea. To be clear: Edward did not realize it wasn’t cool to “try-out” what was not his. He knows enough to say “please” and “thank you,” but “May I” is not yet part of his social vocabulary. Thoughtlessness may be okay among his peers, but older people may take exception to inconsiderate actions.

Here’s the next example. Sitting in a group, watching TV, Edward nonchalantly put his feet (with shoes on) upon the table in front of him. (Horrors!) It made me so agitated I embarrassed him (and myself) by telling him to take his feet off the table.

In response, he pointed out that the fellow sitting next to him also had his feet on the table (which is also not acceptable), but the difference was, the other young man didn’t have shoes on. I didn’t scold the shoeless fellow, although I should have because one does not put their feet on furniture with or without shoes. In their  own home, they can dance on the tables if they want to, but not in Miss Barbara’ abode.  Those sitting around were aghast that I would chastise Edward, but I was annoyed. Please do what you want in your own home, but older people don’t like it when you make thoughtless assumptions when in their home. 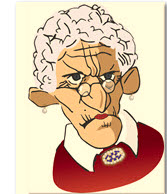 Am I right? Have I become a testy grouch (Hold your fire, girlfriends! That will never happen.) who doesn’t care about offending sensitive youth who have never been told they are wrong and don’t seem to reach maturity until after middle age? After all, for the most part, no one has ever told the snowflakes they are inappropriate or inconsiderate about anything. It may trigger a meltdown and require a puppy to hug.

Alas, if only Edward had my mother! She would have chewed him up one side and down the other. Know what I mean?