There’s a new trend these days, maybe not  new, but new to me! It is called “treat your senior parent or grandparent or even neighbor, as if senility has set in no matter how alert they really are”. How do I know this? I live it every day!

My 43 year old son regards me these days is as if I just fell off the turnip truck and he has to re-route my thoughts. We were watching our home team, the Minnesota Vikings play this evening. Fourth quarter, Vikings 23 and the other team 21 with less than a minute to go and he marches up to my TV and points out with his finger that the only way they stop the game is if the whistle blows and further lets me know that this not like the shot clock in basketball. I blinked my eyes several times to let him know I understood. I was fuming. I taught this kid how to tie his shoes and how to toss newspapers on his first paper route. This was a kid so afraid of thunderstorms that he would pick the lock on my bedroom door with a clothes hanger so he could sleep in my bed. He was four and would drag all his stuffed animals in with me. Suddenly, I need a lesson in shot clocks and football?

In my forties, someone re-introduced me to the mommy harness, via donated grandchildren.  I was now an expert. Multi-tasking was not invented by the young. I could read a script in a play rehearsal while propping a bottle under my chin, or read Goodnight Moon to a feverish grand-toddler while thinking about a mandatory meeting at my human services job. Talking with clients by day, sitting in the park by late afternoon with an audio book in my ears, while watching those same grand kids as they tired themselves on the monkey bars. I was cool. The hip grandma!  No one minded if I forgot a thing or two. My forties shielded me from scrutiny because there was no senior title attached to my identity. Go cool granny!

The grandkids grew up and flew the coop, and then I was sixty. Suddenly, I could hear the crazy train coming around the bend. Though my adult children began taking me places, I had the feeling that one sign of forgetfulness, inability to operate the stove, or placing my keys in the fridge, would earn me a one way ticket on that crazy train and I would end up wearing a bib in a place where pablum is served twice daily. I had to be careful. One daughter was eyeing my only real china, while another wants my mother’s silver set. If a doctor was talking to me in an appointment, suddenly my adult kid wanted to be present.  “She has rolling veins” one daughter piped up because I am apparently too senile to remember that. It was sweet of her but I was suspicious. This girl is the one I had to follow to junior high because she stood in the hallway each day for half an hour, unable to figure out how to work her combination lock!

Various grandchildren offered to take me grocery shopping or to a movie. I complied and bragged to my friends, who looked at me oddly as if I was speaking a foreign language. “Enjoy it while you can” they said, and I could swear they were laughing as they walked away. Little did I know that this could either way. Either I could be seen as a burden if I asked too often and seen as incompetent if I did not call often. Either one of these things can get you a slow ride on the aforementioned train.

At sixty five, I noticed they were speaking loudly to me as if I was unable to hear.”Is MILK on your list?”  “DID YOU FORGET EGGS?” If I lingered at the cheese counter or stopped to talk with a friend, I would hear a sigh strong enough to blow out candles in the next city. Car conversations became a testing of wills. Sheer silence unless they were talking about their lives or loves or problems. One peep from me, even about an upcoming engagement or the near deadline of a writing assignment was met with, “That’s nice Mom….or..grandma”. More dead silence and I taught these folks to read, comforted them when they were afraid…but now…well.

When I finally caught on was last year at age seventy. All of them are both afraid of my aging and tiring of it at the same time. They speak to me as if it is probably the  last time (I am not ill) or they look upon me as a phenomena and pick up my sentences for me, like poorly trained parrots.  I shake my head, get out of their fancy cars, go into my apartment and put on a Johnny Mathis vinyl. My toy poodle and I talk it over and she for one does not think I am going ’round the bend.

Before I go, let me say this, I do not regret one moment of enjoying time with these lovely young people. They do take me places but if I mention maybe wanting some romance in my life, they laugh nervously, “Oh Mother..or oh grandma” because wanting to be anything beyond a mom or a grandma, with all the stuff I keep doing in life, is beyond them. Perhaps they prayed for a “sit and knit” grandma but got instead this ever-curious, always adventurous person instead.

If your adult children or grandchildren are trying to stuff you into the stereotypical box of seniors, don’t get in! Please don’t get upset with them. They are the product of societal hypnotism and in their own way, most of them love and appreciate the person you are. If not, teach them that not all older people fit into the medicine cabinet with the Maalox and hemorrhoid medicine. Stay vital and alert and beware of tickets to ride the Crazy Train! 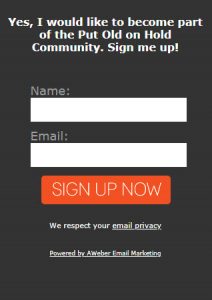