Every year thousands of people reach their fifties and sixties and are designated “senior citizens.” For them, youth is gone, never to return. Their decline is inevitable, based on their chronological (calendar)  age. That is not true, but it is universally accepted as true. Social Security agrees it’s true and starts to dole out retirement benefits at age 65 or before.

In his book Lifespan, author David A Sinclair Ph.D. claims aging is a disease and is treatable. He says, “I believe we can treat it within our lifetimes. And in doing so, I believe everything we know about human health will be fundamentally changed.”

Amen to that. I and others believe it, but that belief will take some time (a lot of time) to mature and come to fruition. But we are getting there.

The traditional retirement lifestyle is a significant player in the decline process because it features and promotes leisure as a lifestyle. Understandably, retirees welcome that lifestyle because, after years of working, they are dead tired. They look forward to becoming part of a new “Alice in Wonderland”  way of life enjoyed by retired friends. What isn’t expected is the decline inherent in the retirement lifestyle. Few think about that.

Tradition and the established culture in which we all live put everyone into ten-year “age boxes” (the 40s, 50s, etc.) that have little useful value. As time passes, each “older” ten-year “age box” curtails personal and business opportunities because of the “common knowledge” about the ability of those in the”age box” they are in. Furthermore, those “age boxes” stress the value and importance of chronological age, which is nonsense.  Calendar age does not determine mental or physical competence, yet our culture uses it to assess the competence of each human being in a specific “age box.”

We need to eliminate the established belief that age 60 is old because it’s not. It may have been “old” at an earlier time when people didn’t live much longer than 65, but age 60 is no longer “old.” Nor is 70 or 80 and beyond. If we can accept new ideas and manage change,  we can stop playing the numbers game and start dealing with reality.

If aging is a disease that can be cured  (and it is being cured right now), we need to take a look at this article: “How long can a person live? The 21st century may see a record-breaker”

In the article, researchers claim someone will break a world record of 122, with a strong likelihood of at least one person living anywhere between 125 and 132 years. But who wants to live that long if they are sick and dependent and just hanging on to life thanks to drugs that keep patients living longer but not in a state that even comes close to optimum health. Most so-called pharmaceutical industry life extension drugs often cause additional problems that make life less than a pleasure.

Dr. Sinclair also says, ” When we stay healthy and vibrant, as long as we feel young physically and mentally, our age doesn’t matter.” That  statement is supported in another Science Daily article, “Feeling younger buffers older adults from stress, protects against health decline”  In the article, researcher  Marcus Wettstein says, “Messaging campaigns to counteract ageism and negative age stereotypes and promote a positive view of aging could make people feel younger.”

Feeling younger is fantastic,  but that’s not the ultimate goal. The goal is to live to a maximum lifespan with the youthful health and vitality we had when younger.  Yes, some of us are getting there, and that said, we may die tomorrow,  but the signs are that we are on the right track.

A huge part of being on the right track is rejecting the nutritionally bankrupt traditional American diet that most people eat. It’s making us fat, clogging our arteries, dulling our brain, giving us diabetes, and other conditions most doctors don’t know how to treat because they did not study nutrition in medical school because it’s not required, believe it or not. Our “health care system” is a misnomer.  It’s not a system designed to preserve or promote health; it’s a system that treats disease.  It’s a misleading “putting the cart” before the horse situation.

But look, if you are interested in repairing your health, an excellent place to start is to get sugar out of your diet, and that isn’t easy because so many of us eat packaged foods that often have high amounts of sugar but little nutritional value. I’m going to say it: SUGAR IS A KILLER. If you can’t give up the packaged junk, at least read labels. When an ingredient label puts sugar at the top of the list, don’t buy the product.

You will want to read: Reducing sugar in packaged foods can prevent disease in millions
Here is the article summary:

“Cutting 20 percent of sugar from packaged foods and 40 percent from beverages could prevent 2.48 million cardiovascular disease events (such as strokes, heart attacks, cardiac arrests), 490,000 cardiovascular deaths, and 750,000 diabetes cases in the U.S. over the lifetime of the adult population, according to a new study.” Isn’t that amazing?

Engaging in exercise is critical, be it working out on a Total Gym five days a week as I do, or walking outside or on a trreadmill for thirty minutes daily. Use it or lose it.

Your health is YOUR responsibility, not the responsibility of your doctor or anyone else. Taking charge is not that difficult. Make up your mind to do it and DO IT. That’s what I do, and if I can do it, you can do it, too.  It probably sounds crude, but there are times when you have to be a badass about how you live your life, regardless of what anyone else is doing or telling you what to do.

Join me in my “I’m curing aging”  adventure. Start by taking a TruDiagnostic test to see where you are in life health-wise. If you decide to order, on the checkout page use the code PutonHold for a $50 discount. No, it’s not inexpensive, but you get what you pay for. Suppose your biological age (which the TruAge test determines)  is lower than your chronological (calendar) age; wow! you are doing many things right for yourself. The test results will give you the information and courage to keep it up.  If your biological age is higher than your chronological age, it’s a wake-up call you will surely want to fix, and they offer help to fix what’s impairing your health and vitality.

Do what you can and must do to be as healthy and ageless as possible as long as you live. When you are not sick or dependent, you are not just helping yourself; you can be a blessing to others who need help. 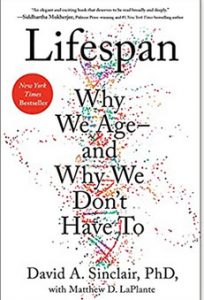