THIS IS A BREAKING NEWS ALERT – A generation of college youth steeped in this existential philosophy of license, futility, and despair naturally erupted in revolutionary violence, arson, and plunder, spreading death and destruction in cities and on college campuses throughout the nation and the world. Almost overnight society exploded in lawlessness and crime, rioting and murder, and in the insanity of the drug culture. This was the result of the philosophy of ignorance concerning the past and hopelessness concerning the future.

Wow! Did I give an accurate summary of what’s what right this very minute or what?!

If you said yes, you’re wrong. I read it in a book, a book published in 1975, revised in 1996 (title provided below). That paragraph refers to an existential philosophy that caused the chaos and confusion described above, so again from the book: In modern times this philosophy was popularized by a Frenchman named Jean-Paul Sartre, who taught that each man exists in a watertight compartment as an isolated individual in a purposeless universe. Since we cannot know who we are, where we came from, and where we are going—since we do not understand the past and have no hope of the future—then the present moment is all that matters.

Only what we realize in the immediate present is significant and has meaning. Distant goals have no validity. Therefore, to sacrifice the present for the future is nonsensical and stupid. Out of this philosophy came the “now generation,” the generation that cannot wait. The pleasure of the moment is the only rational goal of existence. “On with the dance, let joy be unconfined.” “Let us eat and drink; for tomorrow we die” (1 Corinthians 15:32).

Yikes. Let’s link comments below, to the above and the title of this writing, which comes from the song, “Kids,” in the movie, Bye Bye, Birdie. Lyrics include: “Why can’t they be like we were, perfect in every way. What’s the matter with kids today?” Part of that answer is found in a second highly recommended book. Father and son team, Josh and Sean McDowell, wrote in The Beauty of Intolerance: Setting A Generation Free to Know Truth & Love, published in 2016, “Unwittingly, most of our young people today….are probably unaware of how the culture has so deeply shaped their view of truth….The reality is, most of our young people are using many of the same words as we do to define moral truth, but those words have taken on a different meaning for them. And we simply can’t come to an understanding with another person when words and terms don’t mean the same for each party involved.” [Emphasis mine.]

The McDowells wrote that two narratives are happening at one time, which they explained this way.

“The biblical narrative: Moral truth is grounded in the character of God; it is objective and universal. This truth is known by discovering the nature of God and his ways as revealed through scripture and within nature.

“The cultural narrative: Moral truth comes from the individual; it is subjective and situational. This truth is known through choosing to believe it and through personal experience (i.e., you are the creator of your own truth).”

Ground Control, we have a problem: We abandoned the narrative—God’s Word (and what it represents)—and now we want the stability back that it engenders in society. In significant ways, we no longer speak the same language with our younger generations. Sometimes this is because one side will use a particular word, which is the exact word they meant to use if they can get away with it. As soon as the other side balks, they shift to, “Well, the word we used means different things to different people.” And they proceed to move away from the dictionary definition of the word, to what they now want others to believe the word means or can mean if only we’ll become fluid about such things. That side believes there’s nothing wrong with behaving this way.

On the other side, it’s akin to, several times a day, someone moving furniture around in a blind person’s residence without telling him or her. Sadly, this is deliberate on the part of some in positions of power, authority, and education. [Please begin to notice which age groups such people belong to. They’re old enough to know better, so what’s up with that?] If there are some who refuse to agree about what a particular word means, or deliberately cause others to do so for the purpose of confusion, is it any wonder why the heart of our nation is in such a mess? Our younger generations have been indoctrinated into beliefs and a vocabulary we don’t share, nor should we, if such things depart from logic, reality, and God’s word.

Returning to what was said above about the Now Generation (the We I mentioned), it’s time for those involved to own up. The Now Generation, aka Boomers (me), participated in the shenanigans of those earlier disruptive days, or stayed silent, or murmured (ineffectually) on the sidelines while they happened. If you want to hear what God revealed to an amazing young woman about what He holds Boomers accountable for, you can do so at no cost by listening to a replay of a prayer call set up to bridge Millennials and Boomers that took place June 16 (2020). Dial 712.451.1010; access code 988990#, reference code 1074#.  I make two suggestions: Have paper and pen to write with and a box of tissues. When you hear what God has to say to Boomers…. Thankfully, He did tell Boomers what He expects them/us to do that we can do about this.

Clarification: This confusion started in the Garden of Eden, but if generations that follow Boomers seem (or are) muddled out the wazoo, we need to own that in some measure. It’s unfair of us to tsk-tsk and call these younger generations derogatory names since some of what they’ve grown into is based on the seeds we, and subsequent generations, planted or allowed to be planted, and are now sowing. We—most of us—never intended to remove the solid foundation they could build upon (granted, there are some who intended just that, and we let them do it then and still allow it today). Who can blame these younger generations for looking to create something they can believe in. Something that gives them purpose. And place. Because at a deep level, they don’t want Sartre to be right!

At this time, we’re witnessing what results when individuals, acting singly as well as a part of a group, have their focus misplaced because of false righteousness, as a result of a faulty foundation. A terrific online article from September 2018, is “Social Justice: Why Jesus Didn’t Pursue It + Why the Church Shouldn’t Fight for It”.

Whatever your generation, please listen to the replay of that prayer call—if, that is, you’re sincere about making a difference, and if you’re brave enough. In closing, here’s something I got from a meme, which we would all do well to put somewhere so we can remember it all the time:

May the Spirit and peace of the Lord that surpasses all understanding be upon you and your loved ones. May God direct you and comfort you during such a time as this.

May God shine His face upon you and your family’s health, finances, and well-being.

May God bless you as only He knows how.

In Jesus’ Name, and according to God’s will and destiny for you.

First book excerpts from Destined for the Throne by Paul E. Billheimer. 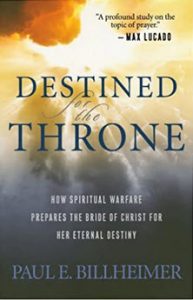