A friend and brilliant writer publishes well-documented articles about current events. She  said this in a recent newsletter:

I guess she has a direct pipeline to the intention of God or the Grim Reaper.

Anyone at age 73 who assumes an early demise because of awareness of chronological age is a victim of a common belief that anyone at age 65 and beyond is really “elderly” (translation: OLD). The word conjures up “old age” specific images, behaviors, and specious facts accepted in the general culture that have no basis in reality. We are reminded of these often misleading “old age facts” over and over. As a result, we live how and what we are taught to think.

I wonder how many people think about the meaning of their chronological age. It’s a reminder of the year we are born. Period. It does not establish our mental or physical competence. It does not determine how long we will live. Most people think it does, but it doesn’t.

The Social Security Administration began in the 1930s when people did not live much longer than age 65. Yet, here we are so many years later, and oh,  how life expectancy has changed — big time. Here is just one example:

Noah was 600 years old when the flood happened (Genesis 7:6). The consensus is that it took 120 years for him to build the ark, start to finish, though there is no Scripture to support that number. However, if 120 years is correct, he was 480 when he started it based on research of extra-biblical resources.

When you become  “elderly”, it’s not the time to anticipate your death. Instead, it’s time to get on with life as never before. It’s a time to celebrate the future. Read this inspiring account of a 67-year-old woman who got a new joyful lease on life and probably extended her life because she didn’t follow tradition and convention:

New Friends: How a 67-Year-Old Struck Up Lasting New Friendships During Her First Triathlon

It is possible to extend the “good years” in advanced age. You just have to take the bull by the horns, learn how to do it, and then commit to doing what needs doing. Start where you are. By the way, while you are on the above-mentioned site, read the reader’s comments. They are inspiring.

I wish everyone would get a TruDiagnostic test. (Click on the link to download the brochure). It would show that we may not be as biologically old  as we believe we are because of advanced age. Fortunately, we are starting to realize that the process of aging (passage of time) is a curable disease. (Read David A. Sinclair’s monumental life-changing book  Lifespan. If the TruDiagnostic test reveals that health is not what it should be, there is help to turn your life around. It will take effort, but it’s better than running from one doctor to another to determine why you are not as healthy as possible,  then coming up without a solution. (Most medical schools do not teach about nutrition).

Start kicking chronological age to the curb. We can learn how to improve health to rock and roll far longer than naysayer “experts” say we can. It’s just a matter of learning, re-learning, and making and carrying out a commitment to do it.

When you are in your seventies, you are just a baby. When you get to your nineties, you will realize how true that is. So enjoy your seventies while you have them. They can be “golden” years in the best sense of the word. Don’t waste those youthful years anticipating your demise. 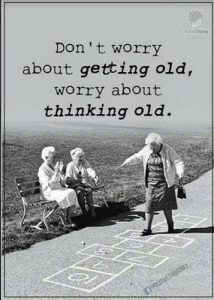