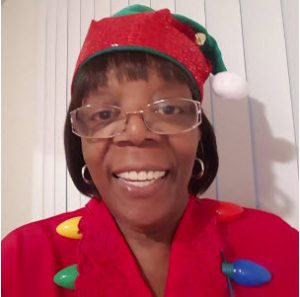 How did I miss the box propped against my neighbor’s door?  In my haste to respond to the delivery driver’s call, announcing that my groceries had arrived, I missed it.

I live on the first floor of our 90-unit 55 plus community, so responding to the mail carrier or the UPS person is usually a breeze. The thing is, I am down the hallway, and if you’ve ever seen the movie “The Shining,” you will remember the kid pedaling his big wheel down a long hall, where he runs into those gruesome twin girls who wanted to play “forever and ever.” Each time I am alone in the hallway, I have the notion those girls, older, creepier, are waiting for me at every turn.

On this day, my forty-six-year-old son came in from another direction and helped to load the groceries into my cart.

Circling the corner a second time, I spied the brown box with the UPS tag. My son followed my glance and sent me a “leave it” look that I would have ignored if I lived in a building like my oldest grandson. I visit him in the city (I live in the pseudo-northwest suburbs), but he and his wife live in an entirely different atmosphere—their elevator talks to them. No kidding. When you reach your floor, a kindly female voice from the Twilight Zone says, “Fourth Floor” The door slides open soundlessly, and you pass other apartments with shoes on the outside of the door, which tells you something right there. After that, everything is sterile and silent. I strain my ears for signs of life beyond those doors but hear none.

The best part of my visit is getting to spoil my great-granddaughter, who is not yet two. I get to mess around with her while they figure out more ways to insulate her from dirt and regular food. However, I digress.

The elevator in our building is crabby and moves in fits and starts along the journey. Finally, it rattles to a stop, and if it had a voice, it would yell, “So get out already.” Therefore, I am knocking on my neighbor’s door to alert them of the package.  In my grandson’s building, there is a little area just for packages. I have seen tenants step inside, look at the packages, see none for themselves, step away, and keep going. Not so in our “secure” senior building.

When the rental office closes at 5 pm, all sorts of antics take place. Seniors have given keys to various relatives, so it is common to pass young people who seem to be wearing halos of marijuana. They regard us with amusement and I stay out of their way.  We cannot pinpoint who they are or to whom they belong, but the results of their presence sometimes mean that things “disappear,” such as a whole 55-inch flats screen television from the Commons.

Late deliveries by FedEx or UPS have nowhere to go because the office is closed, so they leave the boxes at our doors.

My son wants to leave the package. “Someone will see you,” he says. I was already not listening.  When no one answers, I have him lift the box unto our cart. I run to my apartment, grab a sharpie and a sheet of paper. I tape a note to the resident’s door and let them know that I have their box. A picture on the box was of a collapsible wagon.  Someone needed this, and I meant for them to have it.

Two days later, a timid knock on my door, muffled by the barking of my toy poodle (she thinks she is a Rottweiler), I finally make out a nervous voice that says something about a note. It’s my neighbor! I do not recognize her, so she must be new.

In her free hand was a bag with tomatoes. Homegrown tomatoes! “Thank You for being kind,” she said in broken English. I thanked her for the tomatoes, and she wheeled her package away. When she returned, I said, “I am Zenobia,” and she said, “I am Amou.”   Nothing more to say, and I closed the door. In that small exchange, we learned something about each other. I was happy she got her package, and she was grateful. In this world, we do not have to spend money to be kind. As seniors, we must help each other, and we should remember that what comes from the heart is far more precious than anything money can ever buy.