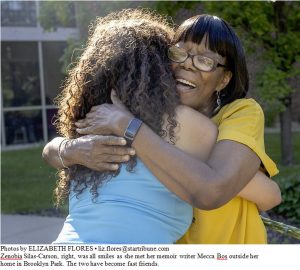 (The following is an excerpt from a press release A novel way to beat loneliness-1
It featured Zenobia and other creative seniors.)

At 73, Zenobia Silas-Carson has been through enough life experiences to fill a book — maybe several books.

She did well in school, married at 17, was physically abused, got divorced, spent time in jail, moved from Chicago to the Twin Cities, was homeless, got her general educational development (GED) diploma and attended community college. She had six children, wrote plays and poetry, got involved at the Loft Literary Center in Minneapolis, organized a journal-writing class, obtained a minister’s license and wrote two books of inspirational fiction. She distributed food and taught tai chi.

And that just scratches the surface.

“She has lived probably 10 of my lifetimes,” said Minneapolis writer Mecca Bos.

So when Silas-Carson and Bos, 47, get on the phone together, they have plenty to talk about. They’re participants in the Extraordinary History Project, a program that pairs older people with professional writers for regular conversations and to collaborate on a memoir — or, in some cases, just talk.

“I love talking to people and I figured that would be a way to beat my new doldrums,” said Silas-Carson, who lives in Brooklyn Park. She has already written about 200 pages of a memoir on her own, so she and Bos focused more on developing a bond than a book.