As a pharmacist who knows the “drug store business” inside out and upside down (I started working in my father’s drug store at age ten), I can tell you that the pharmaceutical industry pretty much controls the world’s health, and that’s not a compliment. “Our prescription drugs are the third leading cause of death after heart disease and cancer in the United States and Europe.” One would think that fact is a secret if we judge by the number of people obediently taking prescribed, potentially dangerous medications.  Prescription medications, except for antibiotics,  don’t cure; they manage symptoms, so you feel better.

It’s easy to believe in the safety of medications if we watch loving family and pet-oriented ads on TV that hawk prescription drugs with dangerous side effects. A few side effects of medicines are quickly rattled off by a voiceover while “feel good”  videos are playing, but those “admissions of guilt” often do not reveal all potential and dangerous side effects. For example, TV video ads for the diabetes drug Farxiga are so engaging that even a healthy person might want to take it. However, in the literature, less frequent but significant side effects for men taking Farxiga include foul-smelling discharge from the penis, pain in the skin around the penis, a rash of the penis, redness, itching, or swelling of the penis. If this happens to a man in a faltering relationship, his partner may assume the worst.

And then there is an irritating thorn in the side of the pharmaceutical industry. That thorn is a safe,   natural substance Big Pharma will never sell, and it’s called resveratrol.  Never heard of resveratrol? Read on.

Resveratrol is a natural and safe “anti-aging” substance scoffed at by the medical profession,  scientists, and the major media. I urge you to read “The Anti-Aging Pill Story Is Getting Old” I quote from the article:

“Since 2004 when Leonard Guarente at MIT and David Sinclair at Harvard published ground-breaking reports about small molecules when consumed orally can mimic the same genetic signal as a lifespan/healthspan doubling calorie-restricted diet, the longevity gene escaped from the bottle.

Here humanity stands 16 years after the Guarente and Sinclair’s discoveries, and no scientist has changed his or her mind and [has] totally dismissed resveratrol.  Resveratrol  largely remains unapplied science.”

Because resveratrol is a natural substance, it can’t be patented, and therefore, the pharmaceutical industry cannot profit from it. Mainstream doctors usually have only a cursory knowledge about resveratrol, so don’t expect your doctor to recommend it. For lack of knowledge,  he or she may scoff at it as “snake oil.”

I have been taking resveratrol daily for a couple of years, and I can honestly say I appear to have stopped aging, and in many ways, many negative effects of the aging process have improved.  The condition of the skin on my face and body is early middle age. I have no aches or pains except a cranky back caused by congenital scoliosis.  I take no medications but lots of nutritional supplements. I don’t eat the typical “out of a box” American diet and have not done so for years. I work out on a Total Gym. My balance is crappy, but I’m doing exercises to improve it. (I don’t allow anything negative to happen without a fight and a plan to fix it.) My vision has improved.  The clarity of my brain enables me to be computer savvy and publish this newsletter. By the way, I’m 92. It would not be unusual to expect that I’d be shriveled and weak in a wheelchair or suffering from senility in a care facility.

But here’s the reality: The chances are that I could age well without the resveratrol. I’ll never know. What else in my background could have attributed to the present condition of my mind and body? Many decades ago, after much research into the work of Linus Pauling, a staunch supporter of Vitamin C, I started taking and continue to take 20-30 GRAMS daily of calcium ascorbate crystals, a non-acidic form of vitamin C. I emphasized the word grams because the government recommendation for daily intake of vitamin  C is about 50-75 MILLIGRAMS which is good but does little to support health. (A gram contains 1,000 milligrams.)

In recent years vitamin C in topical cosmetic products has become the “in” thing, which is great because it emphasizes the value of vitamin C. I have always felt it makes more sense to ingest Vitamin C and let it work its magic from the inside out.

Other than vitamin C, resveratrol is the clear anti-aging winner for me.

Here is a condensed list of resveratrol benefits. Attached to it are 21 scientific references for those who enjoy doing research. Also, I recommend a free, very informative, easy-to-read downloadable ebook about resveratrol by Bill Sardi,  “How the World Got Lost On The Road to An anti-Aging Pill.

I won’t advise anyone to take resveratrol. Taking it is a personal decision made after careful research. If you decide to take it, please don’t assume it will cure anything or transform you back to a teenager again. It probably won’t. But I can tell you this: If stranded on a desert island, resveratrol and vitamin C are the two supplements I wouldn’t want to be without.  I purchase a year’s supply of resveratrol here when it’s on sale at the end of the year.

I hope this article motivates readers to take more control of their health and lives. I believe much “old age decline” is not the result of the aging process but the failure of individuals to take charge of how they think and what they do to control decline. The mind is powerful. Use it to help yourself. It’s never too late to change behaviors and lifestyles. Some improvement, however minimal, is a success, and that success will motivate you to do more. It’s a gift you give to yourself: you are INDEPENDENT. Rather than others taking care of you, you can care for yourself and care for others in need.

Join the exploding army of old people who are declaring war on traditional “old people lifestyles” that contribute to decline.  Dare to be the person you want to be despite what others think or do or what they want you to do.

I am your Captain. If anyone gives you grief on your way to your renewal, let me know. I’ll straighten them out!  As my daughter, Pat warns, “Don’t make my Mom angry! It is better to do what she says.  She is tough as nails.” She is kidding, of course, I think. I wouldn’t swat a fly.

Below is a promotional video I made for No More Little Old Ladies. I hope the link for the video and book work properly! 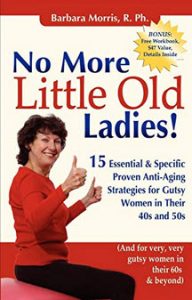