Well, it happened again. A day does not go by that you don’t see a headline referring to an older person as “elderly” or a “grandma”.  Those two words, as used by the media, are not flattering.  The latest headline:

“Grandma, 80, Bullied by Trans Activists After YMCA  Banned Her For Reporting What She Saw”

This is not about the above-mentioned article’s subject matter. It’s not about physical appearance. It’s about ongoing outdated practices the media industry uses to craft a headline. The reference to the 80-year-old woman as a ‘grandma” is denigrating; it emphasizes the possible physical decline she has experienced resulting from the passage of time. She may be a grandma, but that’s beside the point.

Wouldn’t it be more acceptable to replace “Grandma, 80” with “An Older Woman”?

In news headlines, women in their 60s are also referred to as “elderly,” which is insulting. Have you seen a picture of sixty-something Christie Brinkley working out on a Total Gym with Chuck Norris? Actually, there are more youthful, vital 60+ women than you can imagine. If you are in your 60’s or above, and feel years younger, is it fair to refer to you as elderly?

Suggestion to media: Knock it off! Stop offending older persons with adjectives that may be demeaning!  The constant inaccurate references make old horse and buggy thinking continue to infect the culture and stick like Gorilla glue! It gets passed from generation to generation, and few acknowledge that social and cultural norms have changed significantly.

When I say “significantly,” this is what I mean: Between 2000 and 2014, the number of Americans aged 100 and over increased by 43.6 percent. That’s huge! If the trend continues, if you retire at age 65 or before, you may have 30 or more years to live.  If that applies to you, what will those years be like for you? Will you be vital and healthy or a traditional old person in decline, possibly existing in a nursing home or a burden on your family because you adopted the “elderly” dialog as a lifestyle for yourself? We become “elderly” not just because of time but how we live and think about ourselves over time and how we allow others to treat and speak about us.

Years ago, I was fortunate to meet Dr. Helen Harkness and read her future-oriented book, Don’t Stop the Career Clock. On page 79 she wrote:

Dr. Harkness published Don’t Stop the Career Clock in 1999. At that time, her views were very futuristic and often scoffed at. Here we are some 20 years later, and to me, her chronology now is a bit outdated! For example, at age 93, I see myself barely in what Dr. Harkness describes as the  second midlife.  People ARE living and staying productive longer. Why isn’t that being acknowledged?

Don’t assume your genes control how well you age. Dr. John W. Rowe, in his book, Successful Aging, states, “The bottom line is very clear: with rare exceptions, only about 30% of physical aging can be attributed to genes. The other half is related to lifestyle and environment.”

The regrettable part is that many old people accept “old age decline” rhetoric as their reality and see themselves in the way the cultural norms say they should. Even the most erudite persons often buy into it. A knowledgeable columnist friend in her 70s recently commented she doesn’t have many more years to live because of her age. She has bought the “elderly” stuff lock, stock, and barrel. How sad.

You don’t have to accept standard cultural norms that suggest the grim reaper is on his way to nab you because of your age. Regardless of your age, live your life the way you want to. To the extent possible, ignore your “chronological number.” It has no control over your mind and body unless you allow it to. Ignore the blatant, intentional, and subliminal cultural messages that suggest you are rapidly headed to life’s eternal dust bin because of your advanced chronological number.  Refuse to be “elderly.” 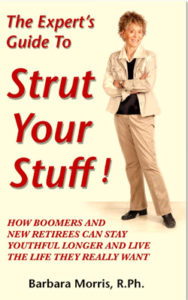 Ignore the constant denigration of “old people”  by “cultural influencers” who don’t have a clue that life can be and is as exciting as you make it, regardless of the year you were born. When words like “elderly” and other ageist words and terms are mindlessly bandied about, know they don’t apply to you unless you allow them to. Be brave. Dare to be different. Thumb your nose at outdated cultural and social norms you don’t like- they should have been kicked to the curb long ago.

Perhaps you need some support to help you fight the “you are elderly” peddlers. Here is a book I wrote when I was 85  (available on Amazon). The Expert’s Guide to Strut Your Stuff  (Ignore possible strike-out)

I also made a video to promote the book.  It plays on QuickTime media player.  Here is the file to plug into the QuickTime player to see the movie: My Movie.mp4 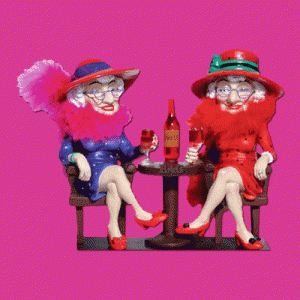 Bachelor Nation, producers of the Bachelor and Bachelorette shows are inviting seniors, 65 and above who are looking for love, to appear on an upcoming program. The Girls,, Gertie and Gloria applied. The application was lengthy but the girls trudged through it, their hopes high.

There were three questions that dashed their hopes and those questions were about COVID. The questions asked if the person had been vaxed, did they get a booster, and finally, the clinker:

Would you get a shot if asked to?

The girls haven't had a shot and they are dismayed by news that people are dropping dead and suffering long-terrm side effects from the shot, so they decided  they will not get a shot, even if it costs them a chance to find Mr. Right. To help others understand the girls' reluctance to get a shot, they suggest everyone watch two videos: Safe & Effective and Died Suddenly (Scroll down on the page to watch the video.)

If anyone would like to try their luck with the Bachelor Nation show, , here is the link to apply: SeniorDatingShow.CastingCrane.com

©Copyright 2022 Barbara Morris, R.Ph, the editor and publisher The Put Old on Hold Journal is a graduate of Rutgers University and a registered, licensed pharmacist. Contributors: include daughter Pat Garner, a well as Joyce Shafer and Zenobia Silas-Carson. Writers wishing to contribute please ask for submission guidelines at Barbara@PutOldonHoldJournal.com. Technical support provided by Jason Saeler.