I’ve been gypped!” I exclaimed as I ran through my mail and pulled the glossy and unfamiliar publication claiming itself to be an issue of Grit. Less than two weeks ago I was standing in the main hallway of our 55+ Independent Senior Living building.

A couple of women, sitting in the uncomfortable chairs designated for those waiting on taxis, food deliveries and Metro Mobility, looked at me like two living question marks. They had been window gazing, making “getting up” motions, each time a familiar-looking vehicle pulled up, then settling in their seats again when they saw they were wrong.  Between the seating and un-seating, they asked what was wrong. I reluctantly showed them the cover of my magazine. “Remember this from a long time ago?” I asked. Both women, over the age of sixty, shook their heads no. “Traitors,” I thought. How could you not remember such a popular publication?

I was almost sorry I had spoken aloud. This would require interaction that I sometimes avoid. Hey, do not get me wrong! I love interacting with my neighbors, but too much interaction can lead to long accounts of aches, pains, and the length of the pandemic. There are times when making time, in my head and heart, for such conversations but this was not the day. I had been feeling good since there were no bills in the mailbox but I had not expected this slicked-up imposter calling itself GRIT magazine.

I subscribed to GRIT for the pure purpose of nostalgia. I remember my mother receiving GRIT when I was a little girl, and I waited patiently to read it after her. It was in the form of a newspaper. I loved the smell of it and the way it seemed to have all the components of a rural paper (which is probably why my Mississippi mother, transplanted to Chicago) loved it so much. There were ads for all kinds of ointments and remedies. There were pen pals for women who enjoyed crocheting, knitting, or other popular pastimes of the era and there was a whole lot of attention paid to crops and fertilizer and other farm and garden references. We had neither farm nor garden, but my mother read GRIT as if it catapulted her back to the old home place.

Many years passed since those old times, and I guess, in honor of my mother, I subscribed to GRIT, looking for the familiar homespun stories, crossword puzzles, and country jargon, but there I stood with a slick, glossy, twenty-first-century imposter that purported itself to be the genuine article.

I discussed this with the two women in those “waiting” seats and managed to avoid accounts of doctor visits, various diagnoses, and grumbling about aging in general.  Again, please do not think that I regularly avoid people; there are just some days I would rather not deal with a listing on how horrible it is to be getting older.

I walked glumly into my apartment, washed my hands at least a hundred times (at least it feels that way since the pandemic) before settling down with a cup of tea and the counterfeit magazine, I turned the pages angrily, deciding not to like anything I saw and I did not have far to go. Tractors, cow feed, bird feed, garden tips, just as many years ago, but without the personal feel. Now, I am sure that many receive their copies of GRIT with great enthusiasm. Many are young readers who have no idea of days gone by. Their memories not only do not include the original GRIT, but there are empty spaces in their hearts that do not hold old Philco radios, Vinyl LP records, or lining up my dollies for a tea party where the only humans in attendance would be my daddy or my mother and me. The slickness of the new and “improved” GRIT simply took me to many places where the original of anything, has been either discarded, phased out of given an overhaul that makes it unrecognizable.

I have since gotten over my disappointment with GRIT. I love being resilient in this season of life. I have projects to complete. People to talk and laugh with and a brand new great-granddaughter (one of four) to spoil and indulge. Life is good. Even with GRIT wearing a brand new face! 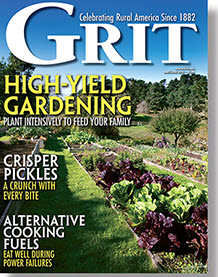